22nd April 2009
After taking a quick shower, we left the hotel in our berms and t-shirts to our lunch nearby. Weather is cooling. We went to the place we eyed on when we were walking to the hotel. It is just nearby our hotel towards Mongkok area. It cost HKD23 each for a plate of rice, and i gotta say the rice they serve is alot. Compared to what they serve you in Singapore? It is like 2.5x more, happy eating in the shop, didn't manage to finish the rice, it was hell too much for my stomach.
Interesting fact: The tea they serve, locals used them to wash their utensil. Just dip it in. (We drank it of course, then i realized that the local have their chopsticks in the cup of tea.) And usually they will give u a slip of paper when u order, take the paper and pay for your meal after you are done. 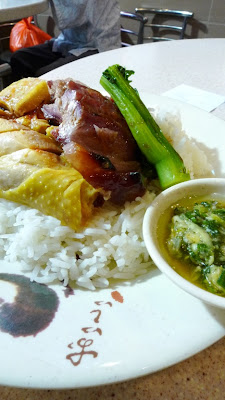 Look at this picture below, it is Guardian in Hong Kong. They named it "mannings" from the chinese translation. They have Watsons, chinese as "Watts Sons Si" and many interesting shop name that are actually familiar to you in Singapore. Keep a lookout for them. You will be surprised. 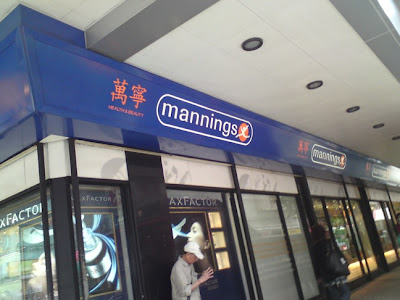 This is one of the nearest Shopping Mall to our hotel, Langham Place. Seems like Singapore developer jobs, there is a lot of shops in it and a UA Theatre for you to catch your show. But of course they are more Theatre in Mongkok for you to choose from. Watching movie in Hong Kong is not that cheap, it costs you HKD50 on weekday off-peak hours. But certainly when there are some movie that will never screen in Singapore, you have to watch it there. =) 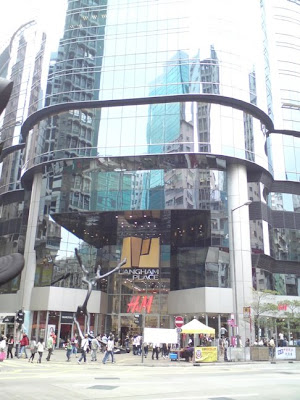 Soon it is about like 1500h? I guess that was the time when we headed to Wong Tai Sin from Mongkok. The MTR ride costs HKD6.6. And we had some photo taking with the name at the platform, it is quite a common thing for tourist to do that, eh? Or should i say it is just so Singaporean. Hee. 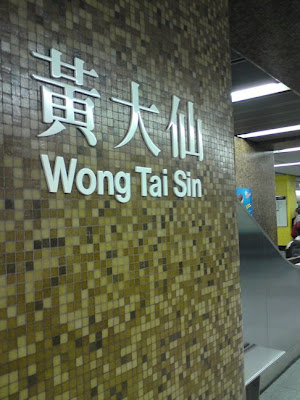 This is the block of shops that sells joss sticks for you to pray in the temple.(it is like Guan Yin Temple at Bugis, but it is more organize in Wong Tai Sin, they don't allow extra hawkering other than the shop itself) We didn't buy any as we thought the temple will have provided some. Who knows there wasn't any until the last part of the temple. I guess locals just buy and lit all the sticks for themselves. I guess they sell just nice for one pax. Didn't wanted to walk out again to grab any, just pray without joss sticks. Be sincere and it will do the job as well without joss sticks. 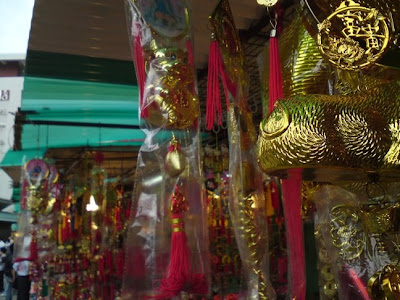 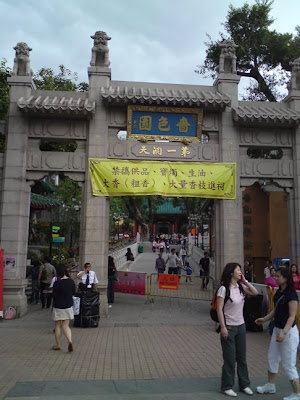 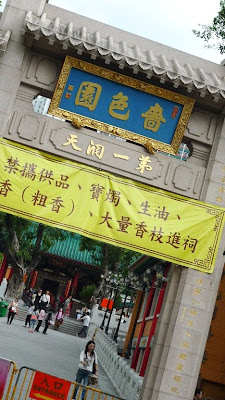 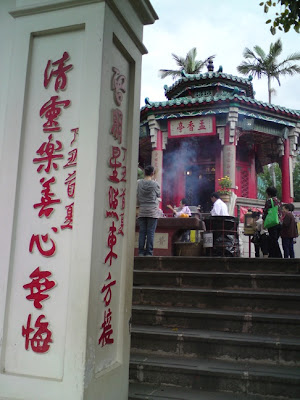 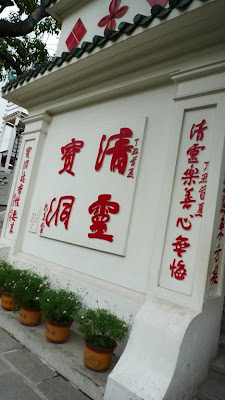 Wong Tai Sin Temple itself, i think it is the main one. But lucky there wasn't any queue when we were there. 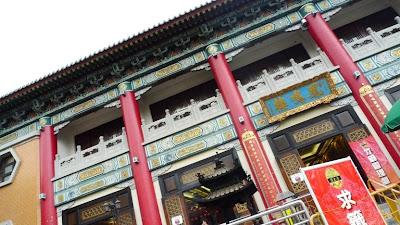 Then we went to the little shopping mall beside it, nothing much and we went down to Tsim Sha Tsui (TST). On the way back, we went to MTR stations in the following few photos and Diamond Hill Station and etc... Make our marks there. 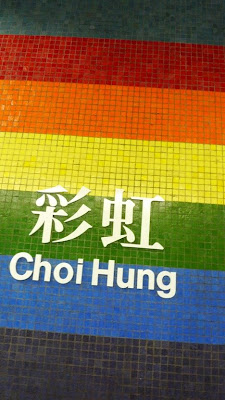 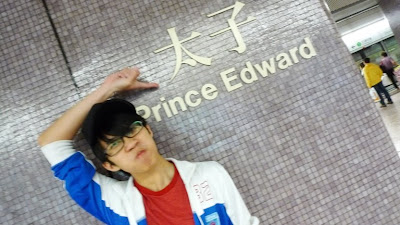 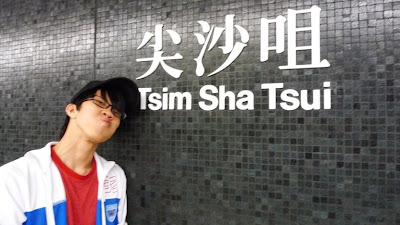 Wong Tai Sin to TST: HKD6.6
Reached TST around 1700h - 1800h and start to roam around the area for some shopping. We hit Silvercord where Goods of Desire (G.O.D) is. Went to Tang Chao (Dessert) but didn't eat there cause wasn't feeling like eating at the moment. Saw this London fashion shop, Choocolate. Then we went to the Hong Kong Tourism Board to get our tickets for the Duk Ling Ride on Day Four. Paid HKD50 each for the ride. Wanted to go into some agency to get cheap Disneyland tickets but at the point of time, it is closed. No choice, we got to enter Disneyland at HKD350 the next day.
Of course we went to Arena of stars to see "Symphony of light" at 2000h. It was really cold at the pier area. Windy like don't know what. Hanged over there until the show started. Found a good spot and start to film the show. Didn't upload the show, if u want, i will add it. Let me know. Nothing special, you can youtube for it. Hee.
Below are some photos taken there. 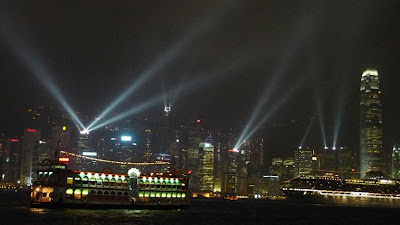 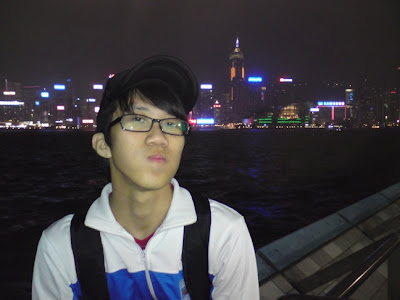 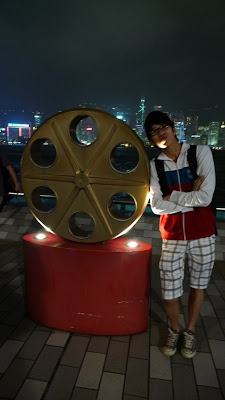 Famishing after the light show, we headed back to TST area for some dinner. Found this Cha Chan Ting (CCT) along the way and had our Wanton Mee. The two varieties we had in the CCT. Not say very nice ah, or should i say i wasn't having much appetite for the first day due to lack of sleep because of the morning flight. =) 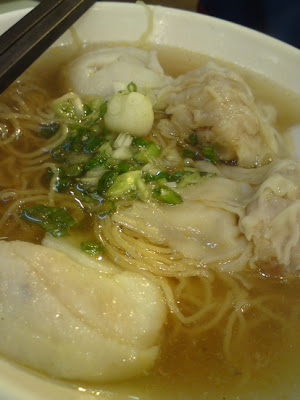 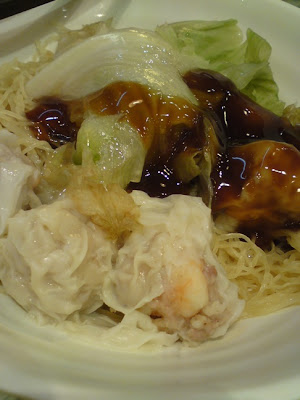 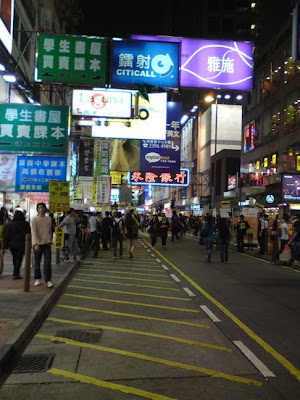 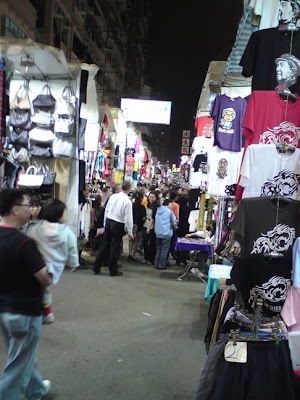 I found something that i like to drink in Hong Kong, from Xu Liu Shan, something that is in Singapore in the past but no longer. It became my daily dose of drink at night when we are heading back to hotel. After the walk along those streets, nothing much to buy actually, at least not for me, for the ladies maybe. As the name suggested, it is Ladies Street ma.
Thoughts for Day One in Hong Kong:
Though the morning flight made me a bit blur for the rest of the day. Didn't really have the feeling of being out of Singapore at the moment. I thought i am still in Singapore. Maybe because you are in an asian country so it wouldn't look much different compared to. Just shocked to see locals washing their utensils in the tea and i actually drank it. *yEeeW* And everywhere you see is Billboards. It is very bright in Hong Kong at night. I still prefer the lighting in Singapore. =)
We actually have to walk through a wet market street (short cut) to get to Mongkok station. It is nice to see what you see there. Be there to see for yourself. Everything is alive. Hee*
Headed back to hotel, shower and rest bit early cause Day Two will be in Disneyland for the whole day. 5 more days to go. Keep a lookout.
Lunch @ HKD23, Duk Ling @ HKD50, Dinner @ HKD30, Xu Liu Shan @ HKD14, Misc @ HKD20
MTR rides included in Day One Top up. No cash involved, so not included.
Total Damage for this entry: HKD137++
Total Media taken for Day One: 198 Photos and 3 Videos
Written by antbites at 12:53 AM