24th April 2009 (Friday)
*Yawns... woke up around 0800h - 0900h, forgotten what time did i woke up. Shower and headed out. Walked pass the wet market and some eatery and decided to buy something to eat first before heading towards Admiralty MTR for the bus to Ocean Park. Yeay! Ocean Park, here i come.
So we took the MTR from Mongkok to Admiralty. 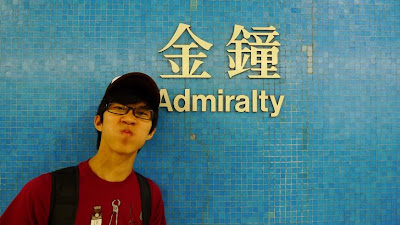 This is the booth where you can buy your tickets to the Ocean Park. It costs HKD208 for an adult ticket. And the bus ride from Admiralty to Ocean Park is HKD10.6. Not much people queuing up for tickets at such early hours. As we are not done with our breakfast, we decided to eat somewhere near Admiralty before heading to Ocean Park. =) 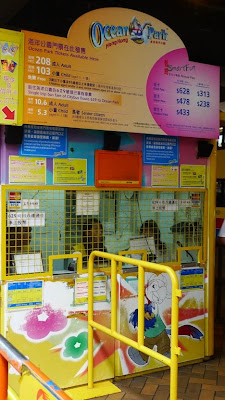 And guess what we found? We had "Da Jia Le" {Cafe de Coral}. This cafe can be found almost everywhere in Hong Kong just like Macdonalds. I have Oat Milk with bread and egg. It costs about HKD20 for a set with drink. Still quite reasonable. 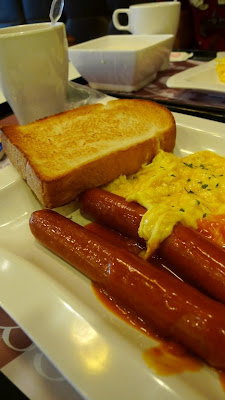 This is what i had for breakfast. =) 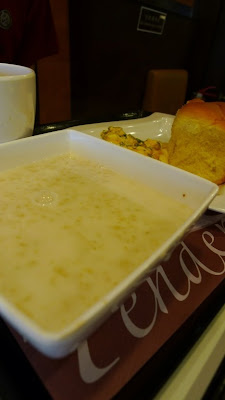 Then of course after breakfast, we went to take the bus from where we had bought the tickets. Bus 629. That is the only bus to Ocean Park. I will recommend this route to Ocean Park. There is another way to Ocean Park from Central to Tai Shue Wan Entrance. But you will hit the long queue for Cable car from the highland to the lowland at the later part of the day after those rides.
Of course this is the one of the entrance of the Park, there is another entrance at the end of the highland side. 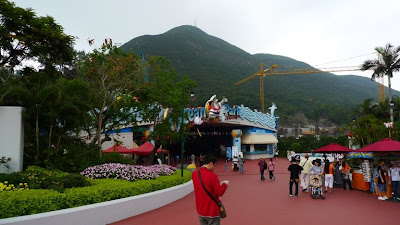 First stop, we went to visit the Panda. The HKJC Giant Panda Habitat where An an and Jia jia lives in. And you should know that these two giant pandas are given to Hong Kong during 1997 to mark the return to China. 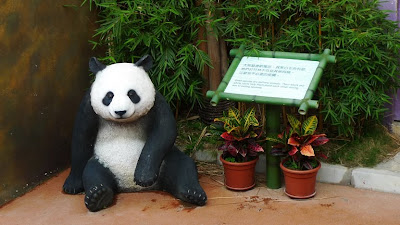 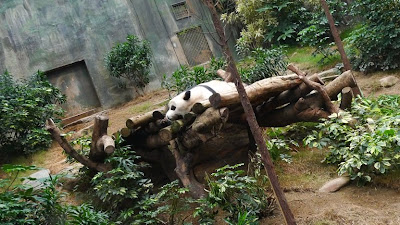 Then we went to the kiddy rides for small kids. And went to the Dolphin academy. Saw 4 of them. 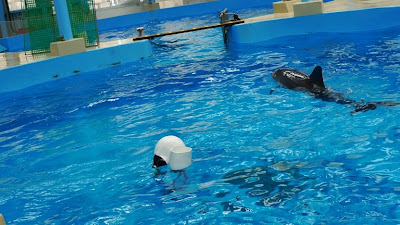 Of course we passed by this Amazing Asian Animals enclosure but we cannot enter cause it wasn't open for public when we were there. There are red pandas, goldfish and many more stuffs in it. Check it out for me when you are there. =) 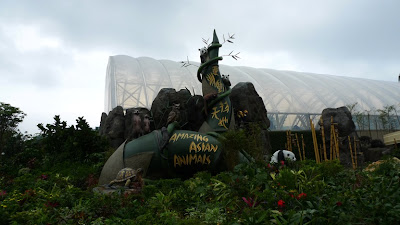 We didn't manage to get into this also cause it wasn't open and this is different from the habitat. Don't be wrong about this. =) 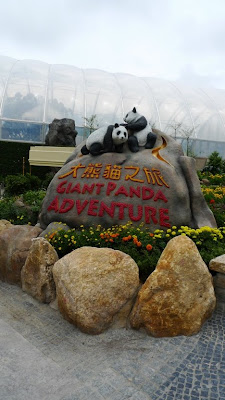 After the little walks around the Main entrance, we went to Madagascar 2 exhibits. They are trying to show the "wildlife" of the show but i think need to improve more. It looks like the work of the Chinese. 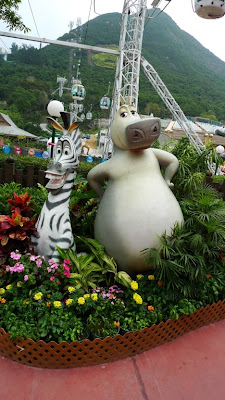 Then we headed up to the other side of the park, where the Marine Land is. The queue for the Cable car is quite short. And i got to warn you, if you enter from Tai Shue Wan Entrance and you want to come over to the Lowland to visit the Panda at the end of your trip, the queue is going to be far too long. Save time and visit the smaller part of the park first. Then you can enjoy the rest of the time taking rides at the other side. 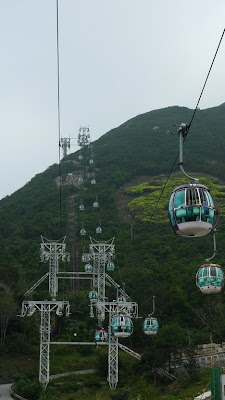 We went to Pacifier Pier to see some Harbor Seals and Sea Lions. Spent some time there taking photos. 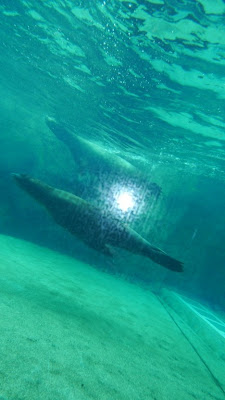 Took some rides in between the attractions. And we came into the place where i like most in the park, the Sea Jelly Spectacular. See the following few photos to understand why i like the Sea Jelly so much. Ain't they just so beautiful, it is like the cosmos tube you have at your home. If you have a tube that contains Sea Jelly, the effect is much nicer. =) 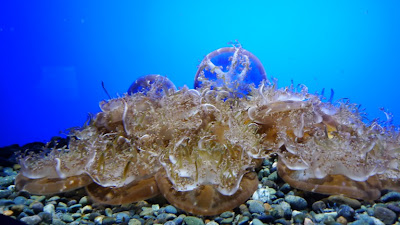 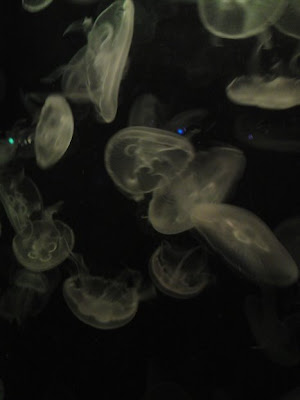 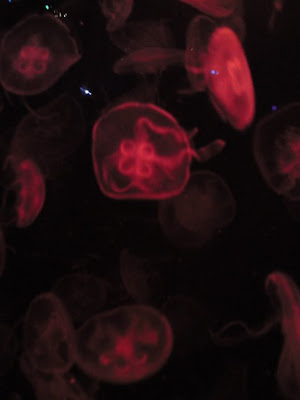 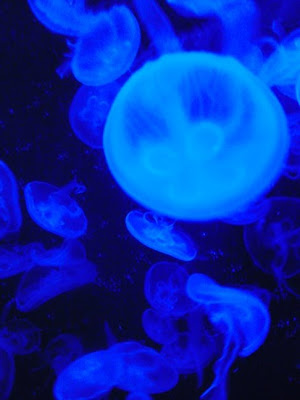 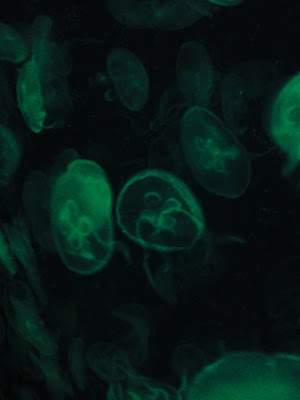 And then the Atoll Reef, when it is already flooded with Chinese. Pushing their way through the already small path. And they don't really care about it, speaking so loud as in they cannot be heard. I felt that we are like in Atoll Market instead of Atoll Reef for a moment. Calm down and didn't let them spoil my mood. Continue to take photos along the way and understand more things. This is like the Underwater World in Singapore without the travelator of course. 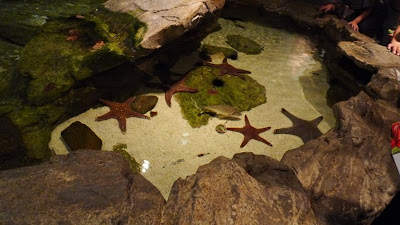 I found Nemo. It is Clownfish for you information, those who don't know. 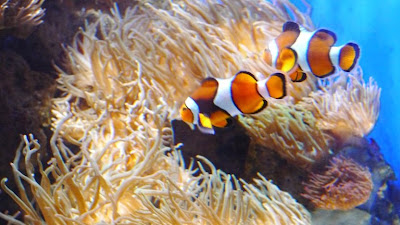 And this is interesting, they are like snake but tiny weeny snake embedded in the sand and only showing part of the body. Movement like seaweeds because of the current in the water. I forget their name le. *shits 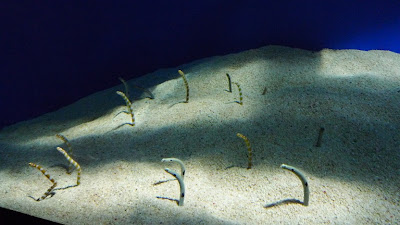 Then you have the rays, a lot of species like Black Spotted Sting Ray, Eagle Ray and etc. There are sharks too and many other more. But i still prefer Singapore's Underwater World. In Ocean Park, it is a big tank that goes like 3-4 levels high and you just walk in circle until you hit the bottom. So it is like seeing the same aquarium throughout the walk. 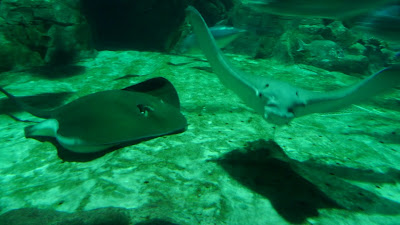 Ocean Theatre is about the last place we went to. We missed the 1530h show due to the massive crowd and we decided to sit down somewhere near for a bite. Had Sausage Bun for about HKD21. And due to the walking for the past 2 days, my left thigh hurts a lot. Really had a hard time walking around with the injured leg. It sucks to have the pain on my leg.
We went into the Theatre at about 1645h to book some good seats to watch the show. The show will start at 1700h and of course you wouldn't have it start on time. So we just chit chat there lor. 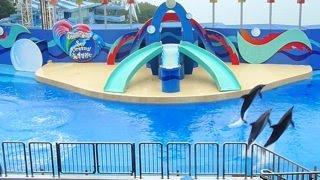 After the show, we went to take some rides before the park closes at 1800h. Walked pass the Cable car queue and it was long, i tell you. Those who had spent their time at the rides area are rushing over to the Lowland Area to visit the Pandas. I guess it will be crowded over the habitat. So i will strongly suggest that you follow my route to Ocean Park. It will saves some queuing time. =)
Have fun if you are there... next up after Ocean Park, we headed back to Admiralty and up to the Peak.
Written by antbites at 8:04 PM