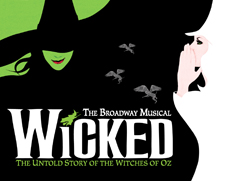 I wouldn't say it was over the top performance last night as Jemma Rix only played for the first few songs and Gretel Scarlett took over "I'm Not That Girl" there after. Nevertheless, it is still a great musical to catch. Despite sitting too close to the stage, it was quite an experience. I'm able to really focus on the show rather than having an overview of it.

I love the details they put in the show, it deserves my two thumbs up! No wonder it's one of the best broadway muscial along with Phantom, Cats, Chicago... next up "The Chorus Line"

However, i am still pretty upset with what happened before and during the show. Given a link to book the ticket at a huge discount, i wasn't able to book a single seat if there is an single seat left beside. How frustrating is that? I called Sistic and they can't do anything about it. I have to find an already single seat or select a seat that wouldnt leave a single seat beside. *roll eyes

And in the theatre, no photography allowed at all. I always thought its no photography during the play. Its very stupid for the ushers to stop people from taking photos of themselves with just the backdrop. They have to do something about it.
Written by antbites at 1:51 PM