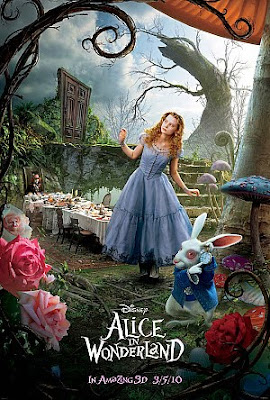 Alice in the wonderland a 2010 fantasy film directed by Tim Burton.
In the film, Alice is now 19 years old and accidentally returns to Underland, a place she previously visited 13 years ago. She is told that she is the only one who can slay the Jabberwocky, a dragon controlled by the Red Queen. Burton said that original Wonderland story was always about a girl wandering around from one character to another and he never felt a connection emotionally, so he wanted to make it feel more like a story than a series of events. He does not see this as a sequel to previous films or a re-imaging. (extract from Wikipedia) 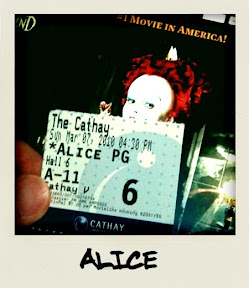 Ant's review on the film: The movie draws in from Alice's dad in the meeting while she had a nightmare. Then slowly moving on with the story which wasn't that nice to me. It is just a simple/safe movie to catch. Not the usual Tim Burton kind of movie, as i recall his Sleepy Hollow, Sweeney Todd kind of dark, classy movie. If it is not for Johnny Deep and the adaption of Alice in the Wonderland, i might think it is not really a nice show to catch. This is just my humble thoughts, please do not sue me for this. =)
Morale of the story? Believing in the impossible.
From this movie onwards, i will have a panel of 5 Ants. Lets see how many Ants will be attract to his movie? I can see 2 empty seats which means 3 Ants rating.
It's a bit over-rated.
Written by antbites at 12:12 AM