23rd April 2009
Had an early rest the night before today as we are going to the Disneyland for some fun, guess it will be a tiring day. It is more of a photo blogging at Disneyland, nothing much for me to say, see it for yourself and go there yourself to feel it.
Woke up around 8? Wash up and went out for breakfast nearby before heading to Olympic MTR Station which is at the other side of the hotel. Our hotel is located just in between Olympic Station and Mongkok Station which makes us better in going anywhere without changing too much lines on the MTR system. Cool eh? I am not promoting for the hotel and i don't have further discount the next time i go k? Hee...
We settled at this CCT for breakfast. Which costs around HKD20 each. Prior to that, we went to the 7-11 and bought "Prepaid SIM Card" for the phone so that we can contact the HK Crazy Gal easy and cheaper. It costs about HKD48, if i am not wrong about it. You can check out PCCW for their prepaid card costing. There are different kinds. And the cards sample are placed together with the sweet section at the counter. Don't keep looking at the board behind the counter, like what we did on Day One, trying to find it but couldn't. 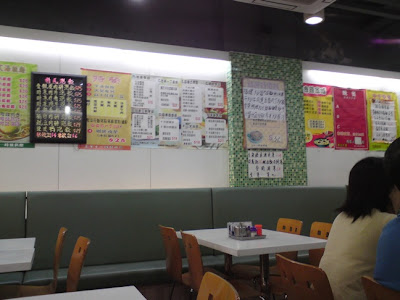 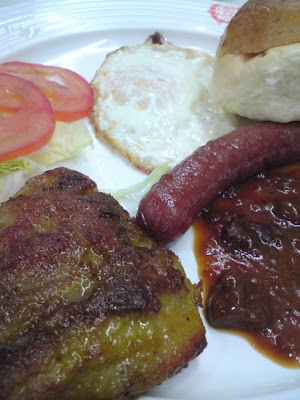 I had this for breakfast and i think it is nice. But look out for something nicer near this place we found later the trip. But glad we found something nice, will return if we stay at the hotel again. Lookout for Day Four or Five entry. =) 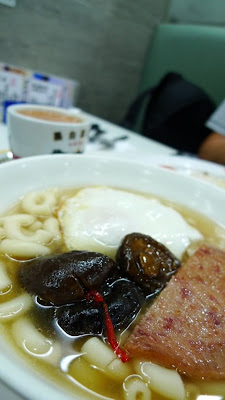 After breakfast, we headed to Olympic MTR Station, there is a shopping centre as well there. Nothing much over there, can take a look when you are there. But don't purposely go there to shop, because there is nothing much? =) 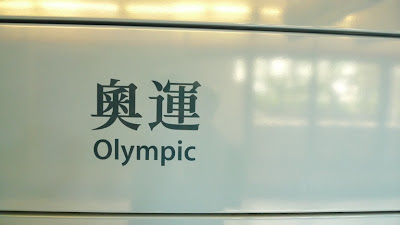 Tung Chung is there place where the Ngong Ping 360 and Citygate Shopping Mall (where all the outlet shops are) is at. So this MTR takes us there on Day Five. Quite convenient hor? 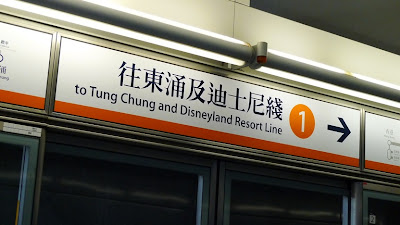 Sunny Bay is the station where you need to change to the Disneyland resort line to get your bum to Disneyland. =) And soon you will find out in Disneyland. 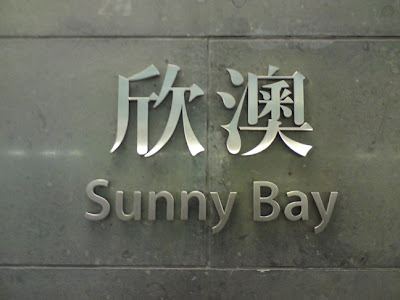 And soon we hopped onto the Disneyland resort train and head to Disneyland. And i guess you guys had seen too much about Disneyland train? Don't you? So i don't want to overkill the photos i post here. Cause i took like don't know how many photos in the train itself. And we actually took the train to Disneyland, waited for the people to get down and took it back to Sunny Bay and then back to Disneyland. So that we can have the whole train by ourselves and do some photo taking without anyone back to Sunny Bay route. Opps*
Olympic MTR - Disneyland : HKD16.4 (expensive hor? it is like SGD3) 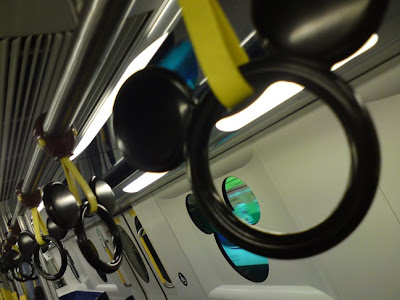 This is the guy who sold us the tickets to Disneyland. And he asked us whether we are locals, so that he can give us the local price at HKD295, cause Disneyland jacks up their price to HKD350 for tourists. Bad eh? I thought so too. Can't they like increase after we had visited? Sad... 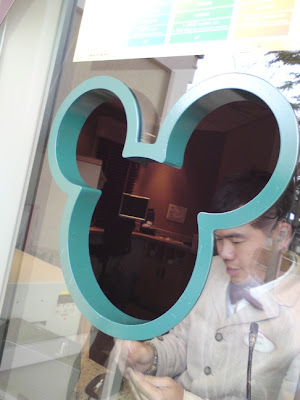 After the gateway into the park, this is the first thing we saw... and i guess you guys had seen this on many blog entries of others who had went to Disneyland ya? 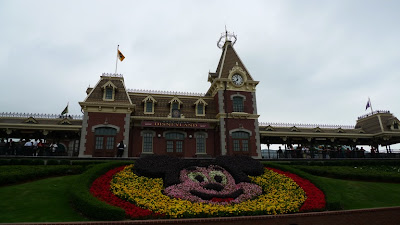 Of course, the first thing you should do it to take photos with the main lead in Disneyland? Mickey and Minnie? My cousins... like real, duh? Queue for quite long for this two stars. Saw chipmunks at the other side taking photos also. In the end, we didn't have the chance to take with them. Sian~ 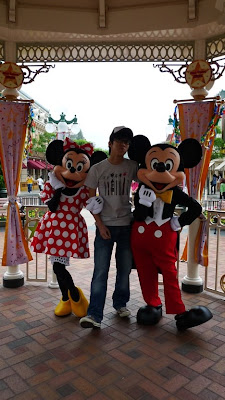 And we actually did this... So bo liao hor? To get some freebies from the store, i guess it is so Singaporean lor... 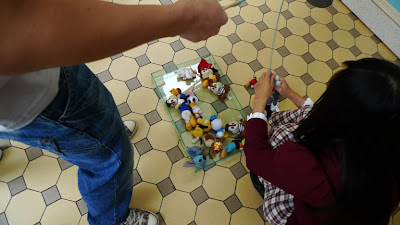 First in was the Adventure Land, where Tarzan stays in. Roam around the place. Went to the treehouse and have a look at how Tarzan normally lives his life in? This was the time when the camera battery runs low, oh no. We are just like starting the trip and it had gone low? Hee... too many photos in the front le, which i didn't show them. 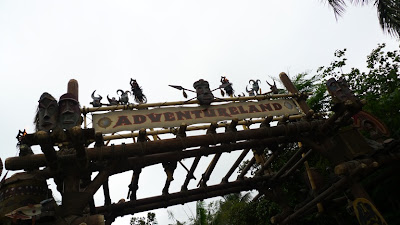 Then off to Fantasyland for some Cinderella Carousel ride, The Many Adventures of Winnie the Pooh, Dumbo the flying elephant, Sleeping Beauty Castle, Mad Hatter Tea Cups (where i am so dizzy after effects) and next to the Fantasy Gardens for more photo taking with characters. 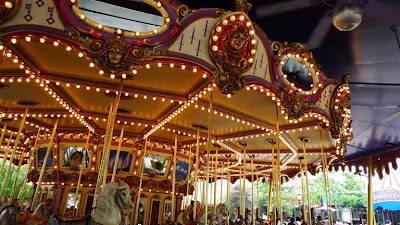 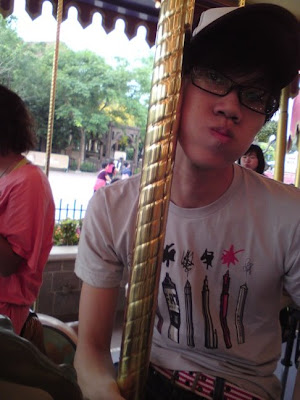 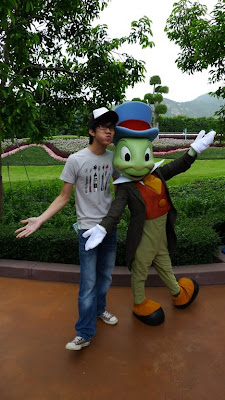 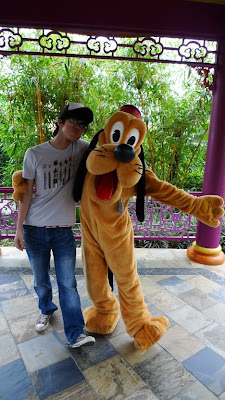 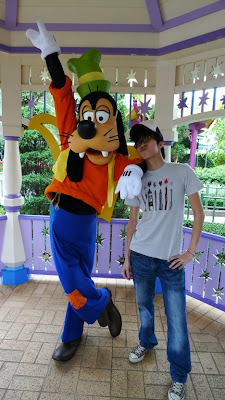 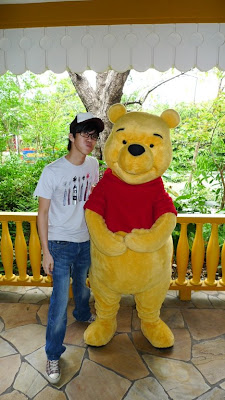 Saw all the characters i took with? Not much and the queue wasn't very long. Lucky it was on the weekday, but i guess you will see many tour group from China. It is flooded with them k? No offense, chinese. =) Then up next is the Disney on Parade at 1500h. So fast hor? Like i didn't do much at Disneyland hor? And we didn't have anything yet. So hungry and cold. So ke lian lor... 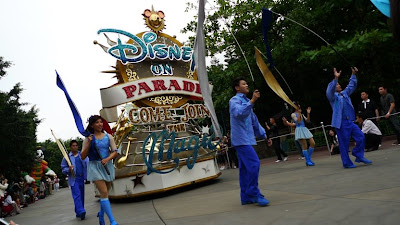 I guess it is time to sleep le... late le.. i will come back for Part 2 again with post from Ya Ma Tei, Temple Street
Written by antbites at 1:11 AM