Day 3 of our trip happened to be the 15th day of Lunar New Year which also happened to be Buddhist holiday of Sangha Day, Makha Bucha Day in Thailand. It is observed in Thailand on the full moon of the third lunar month, which is usually the end of February or early March. Sangha Day commemorates a day when 1,250 monks, all from different places and on their initiative, spontaneously came to pay homage to the historical Buddha.
In Pali, Makha is the name of the third lunar month, and Bucha means "to venerate." On this day, Thai Buddhists gather at sunset in their local temples to participate in candlelight processions called Wian Tian.
The event only happen in the evening and we went to temple visiting the day. Not much people around which was a good thing. We left hotel around 8am in a cab to Wat Pho. (always ask the hotel to help you get a cab, let the hotel tell the cab driver where you want to go. if the driver suggest other places, don't care about him. just insist that you want to go to the place you mentioned, that's it) Wat Pho is where the Reclining Buddha lies in. It is open from 8am to 5pm every day. Admission fee is 50B per pax.
So brief introduction to Wat Pho: Wat Pho is one of the largest and oldest wats in Bangkok (with an area of 50 rai, 80,000 square metres), and is home to more than one thousand Buddha images, as well as one of the largest single Buddha images: the Reclining Buddha (Phra Buddhasaiyas, Thai พระพุทธไสยาสน์). Made as part of Rama III's restoration, the Reclining Buddha is forty-six metres long and fifteen metres high, decorated with gold plating on his body and mother of pearl on his eyes and the soles of his feet. The latter display 108 auspicious scenes in Chinese and Indian styles. The temple is also known as the birthplace of traditional Thai massage. (extract from Wikipedia)
Tips: Remember to change alot of 10B coin and 20B notes. You will need them. 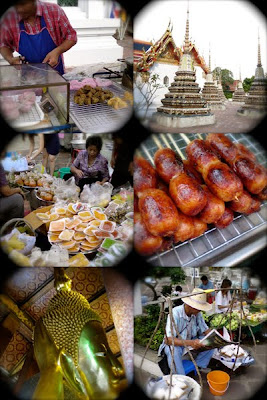 After Wat Pho, you can visit Grand Palace which is beside but you have to be in proper attire or you can always rent something to slip on at the entrance. We skipped the place and went straight to Wat Arun. Ask around for direction as to where to take the river taxi to Wat Arun. (Tips: ask those tour guide who are free hanging around waiting for their travelers) Just a short five-minutes walk and you will be there. But on the way there, there is too much food to eat, so we spent more time getting to the river taxi. =)
The short ride across the river is just 3B per pax and you will be at Wat Arun. Admission fee is 50B as well.
Wat Arun is another famous temple which is also named as the Temple of Dawn. The outstanding feature of Wat Arun is its central prang (Khmer-style tower). Begun in 1809, it may have been named "Temple of the Dawn" because the first light of morning reflects off the surface of the temple with a pearly iridescence. Steep steps lead up to two terraces. The height is reported by different sources as between 66.8 m and 86 m. The corners are surrounded by 4 smaller satellite prangs. The prangs are decorated by seashells and bits of porcelain which had previously been used as ballast by boats coming to Bangkok from China. 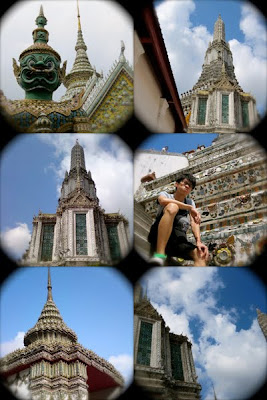 After Wat Arun, we cross the river back to Wat Pho side and tried to take a tuktuk to Chinatown but we ended up at some seafood restaurant near our hotel by a taxi as the jam was real bad in the afternoon as many Chinese are making their way to temples around Chinatown for the buddhist day. What happened at the seafood restaurant was another story which i don't want to mention about. (Take note, never ask the cab driver to suggest you places. Plan your program first.)
After lunch, it is shopping time at Platinum Fashion Mall. But the two boys went to Mister Donut to take a drink and have our lovely donut again. =) We spent around 5 hours there. Getting more shirts and berms this time. 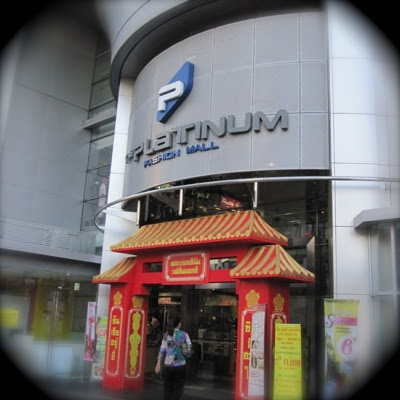 After shopping, we went to the roadside stalls between Platinum Fashion Mall and Central World. The food is nice and cheap, you guys can try it. =) 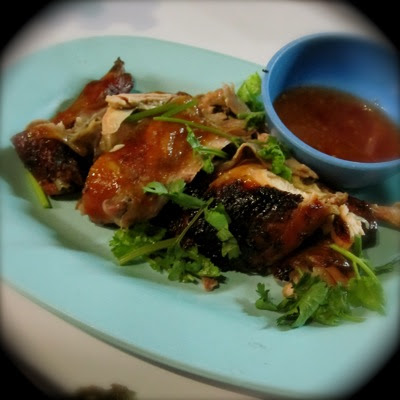 After dinner, we thought of dropping by the Revolving Roof Top at Baiyoke Sky hotel but i guess everyone is tired after a day of walking and shopping. So we skipped it and rest early for the next day program at Ayutthaya. One-hour-thirty-minutes drive out of Bangkok to the previous capital of Ayutthaya. Stays tune for it, Day 4 of my Bangkok Trip.
Written by antbites at 11:22 AM